Difference Between Nerd, Geek, And Dork

The common thought is that nerds, geeks, and dorks are one and the same. However, I don’t think so. Semantics, shemantics, you say.

Although they seem very similar, I’m gonna have to go with a “yeah I don’t think so.” Looking them up online doesn’t provide definitive results, but I am still convinced. (Looking them up online does prove amusing because apparently the first definition of nerd is “a stupid, irritating, ineffectual, or unattractive person.” Stinks to be called unattractive in the dictionary.)

First off, the most important thing to note with any of these terms is that they can have both negative and positive connotations. I think that it mainly depends on your self-awareness. So if someone calls you a nerd, and you think of yourself as a nerd, then it’s not so bad. However, if you think that you’re a cool guy and you get called a nerd, all is not right with the world. As in many things in life, the failing of some expectation will result in your disappointment. And sadness. And low self-esteem. You get the point.

Alright so back to the matter at hand. (Cue “Nothin’ But A G Thang”! ) Okay back to it, really now.

Here is the breakdown of the different types (at least in my mind): 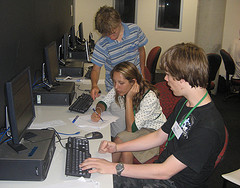 By day I’m a software engineer. (By night a superhero, but that’s another matter.) So I’m obviously a little biased if I give a good definition for a word and also remind everyone that it can describe me. But whatever, it’s what I actually think.

Some computer programmers (but by no means all of them) generally tend to be of the sort of people that want to delve deeper into understanding issues than others would. They want to truly understand how something works rather than just settling for using the end product. In the case of computer programming, while everyone else is content with looking at websites, using applications, and generally enjoying the products of the computer programming, the programmers themselves are working to create those products. And if they’re not creating them, then they’re trying to understand them.

Some of them might not be like that, but those are the kind that will end up not being very good at what they do. Those are the ones that do not have Professional Integrity. They’ll also end up being your boss, but more on that later.

In a general sense, nerds can be from all different backgrounds. But I think that they can generally be described as someone who is willing to study and do the work in order to learn the stuff. I’m not quite sure that someone who is naturally gifted with intelligence but who doesn’t utilize it can be categorized as a nerd. No, I take that back. They cannot be categorized as a nerd. They’re just smart and lazy. Really, how much worse can you get? I think that most people would rather be dumb and hard-working than smart and lazy. 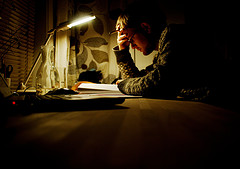 Nerds can often be found in libraries, hunched over books, or wondering aloud about their surroundings. “Nerd” seems to be used most often in a complimentary way when describing others.

Someone can very well be a nerd, and you wouldn’t be able to tell from the outside appearance. The stereotype of the nerd is a skinny guy with glasses and a pocket protector. But something that I learned in college is that the surfer dude can be just as much of a nerd as the stereotype. He just hides it better. Much better.

The unfortunately sad thing about the term nerd is that it doesn’t just apply to those that work hard. They actually have to be good at whatever it is that they’re doing, whether school or work. Someone that works hard but who still is not as successful is just that, a hard worker. (Of course, a hard worker is still better than a smart lazy person.)

Basically, nerds rule. They’re even better when they know that they’re nerds and are not socially inept. 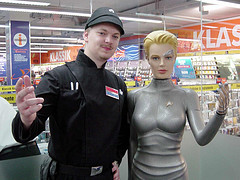 In their work they will do things that they have no idea the meaning of. Unfortunately, they will sometimes correctly stab in the dark and get something right. That will only reinforce their thinking that their way is working. Stumbling, somehow they manage to get others to help them so that they eventually finish whatever it is that they’re doing.

I generally liken geeks more to IT (Information Technology) type of people rather than computer programmers. These are the people that know how to use a computer very well, but who would not be able to program “Hello World.” They can fiddle with and modify settings and properties to no end. They love computers, but they don’t actually know how a computer works. Of course, not all IT folks are like this. In my experience, it just seems like they can more generally be described this way.

Even beyond the IT people, geeks can be interested in a wide spectrum of topics. They will often be interested in technology-related things. I think that it’s because not everyone understands these things. Since geeks do not have skills in some areas of life, they want to have an area of expertise where others could not compare to them.

So yes, geeks are the types of people that are not only interested in Star Trek, but who will also dress up to go to the premiere. They’ll also buy collector cards, read forums online, and read every single book about Star Trek. Obsess much? Yes they will. But you don’t know where the Klingon Galaxy is located relative to our current position in space, do you??

Geeks come in all shapes and sizes. Of course, those are usually the odd shapes and sizes. They are generally not as hard to spot as the nerds because of their disregard for what others think of them. Their clothes don’t match, and they might occasionally offend others with their insufficient personal hygiene.

Still, geeks have their strong points. They are dedicated to what they like. They don’t really care that much what other people think about them. And they generally rule the Internet. However, they don’t rule sports, social situations, or tangible environments. They’re awkward in situations that they’re not accustomed to (like the aforementioned) and tend to do things that give away their geekdom like go on incessantly about their favorite topic when the real topic is something entirely different.

There’s not really any two-ways about it, “dork” is not too good of a term. Obviously if someone is using it in an endearing fashion, it’s not too bad. And if someone says it about themselves, it’s usually in an amusing and self-deprecating way. But the term itself doesn’t have too much positive spin on it. 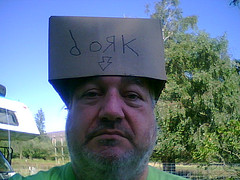 Dorks are the type of people who will do silly things. That’s not to say that they’ll necessarily be the ones making grand gestures to make people laugh. But they are comfortable enough with themselves to do things like put a “dork” box on their head and laugh at themselves.

If the dork is aware that they are a dork, then it’s funny. If they’re not aware, then it’s painful to watch such a socially uncomfortable person try to get by. Now I’m not sure whether they feel awkward or if they feel at ease with themselves in those situations. All I know is that it’s sometimes hard for me to watch.

Once again, there are good traits in the dork. The self-aware dork is able to not take themselves too seriously. They are able to do what they want without caring about others’ opinions. And even the dork who is not self-aware is able to make others feel more comfortable simply because of their silliness. Nobody feels the fool when they’re next to someone who is more foolish.

The funny thing is, I’m all of these things.

So what can you do with this knowledge?  I have no idea, but here are some fun items to get while you figure it out: