Growing up (or I guess in general just being in want of money), people love to receive money as a gift. In some ways money is the ultimate gift because it can be applied to the purchase of anything. Only received $10? Well if you love technology then you can still save it towards the purchase of a new cell phone. That would be much more useful than some random $10 vase.

On the other hand, I think that money can sometimes be a silly gift. I guess some people just don’t feel like it’s one of their love languages so they don’t see any merit in spending effort or time on it. More often than not people just pocket the money and forget who gave them what. For better or worse, you’d remember your great aunt if she gave you that $10 vase.

By giving money, we go through life and essentially just move money around. We host an event and people give us money. We go to their events and give them money as well. We try to give an appropriate amount, which oftentimes is close to what they gave to us. So it seems like everyone ends up right where they started!

I dare not rant too hard against money or else I’m going to get cut out of the loop. So my method of handling this is to put any money that I receive into a separate “bucket” that gets earmarked for special purchases. When I save up enough money then I can buy something fun, and it feels like everyone chipped in and got a group gift. Perfect!

There are a lot of people out there who never learned about littering.

Who do they think is going to pick up their bags of fast food trash from the road? The “government”? Their parents? Or perhaps they’re just doing the world a service and allowing people to volunteer to help out their communities.

I can understand those that want to vote for “free” benefits for themselves. They’re just trying to get by with as little work as possible. I’m not saying that I agree.

However, just like someone is actually paying for all of those “free” benefits (medical, welfare, food stamps, etc), someone is going to be picking up the fast food trash. So if someone doesn’t understand something as simple as picking up after themselves then I hardly think that they’re going to understand working for their own benefits.

Babies cry and make noise. This is no revelation. However it is still not socially acceptable for babies to cry and make noise everywhere that we go. It’s why we can’t take young children to nice dinners, the movies, or really anywhere that’s too expensive. Most recently this happened to us when the Bear was crying on our flight.

We don’t go on plane rides too often, but we do need to alter our social interactions at church every week. Our church is large enough that there’s a cry room that separates the parents with children (too young for the nursery) from the rest of the congregation. There are glass panels that allow the parents to participate without disturbing everyone else. Or so the theory goes.

The problem is that while it separates the babies from the congregation, it also separates the parents. This creates its own culture that is different from everyone else. It’s a culture where people don’t stand when everyone else stands, and people can talk when only the pastor is talking.

I can understand the thinking behind the cry room, but if I’m going to a church service then it’s not so that I can hear other parents chat. It’s really hard to concentrate or participate when you’re in the cry room (even if you want to). I’m not saying that I can always pay attention now that I’m out of the cry room, but at least I won’t be tempted to blame other people now.

On the other hand, I have no idea if going to a church service where the children sit with the parents is any better since I can only comment on what I’ve seen or experienced. And I’m sure that no matter what church you go to you will find people who will try to not participate (see Everybody Loves Raymond season 4, episode 14 “Prodigal Son”).

The Bear Was THAT Baby On The Plane

Going there wasn’t fun because she just wanted her mother the whole time. Coming back was even worse because we tried to get her to sleep when the cabin lights dimmed, and she didn’t like that. Actually she probably hated it. Screaming and wailing soon followed.

Nothing worked! We tried feeding her (magical) puffs, singing, shushing, talking, and ergo-ing. All we got in return was an assault on our ears and our chests (from baby fists). She was tired, but the only way that she ended up falling asleep was if I walked around and did NOT talk to her. It seemed that talking to her made her fussy again. I imagine that she protested because she knew that we were trying to get her to sleep. Her nap was a brief respite. She was only really comfortable sleeping when it was NOT sleep time (i.e., lights were turned on and people moving about). 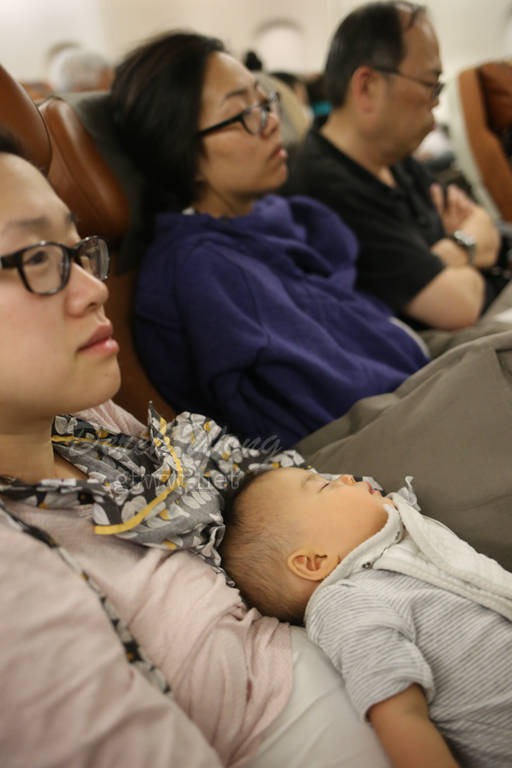 I have now been taken out by the Bear and her sicknesses twice within a span of 3 weeks. Considering I always thought of myself as a healthy and robust person, it’s no joke when they say that you should avoid having kids if you don’t want to get sick! It just goes to show you that none of us are really that strong. We’re really rather feeble and weak (despite our best intentions).